You are here: Crunchy Betty » Blog » Conscious Living » Who Really Cares What the Neighbors Think? 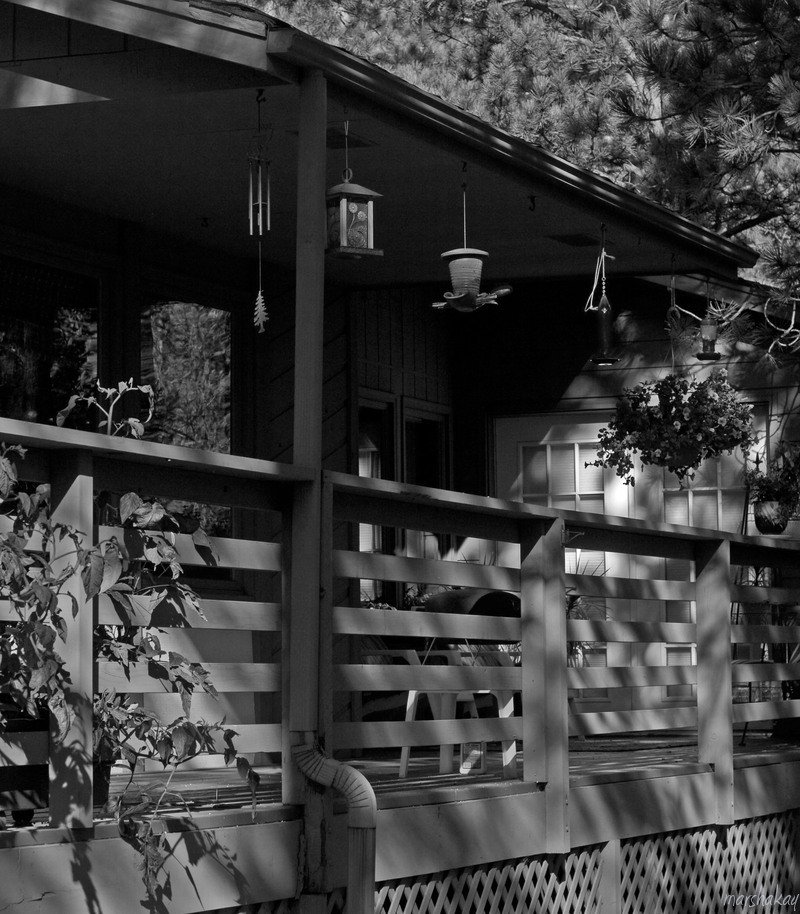 We went to my parents’ house for Thanksgiving, only it was just the three of us: Me, Fiance, and my 13-year-old son. My parents deserted us for the other daughter’s family in Kansas City

Their house is lovely, tucked in a sweet little mountain town, with a wraparound deck and an inferno for a fireplace. The perfect setting for a quiet little Thanksgiving dinner.

At one point on Thursday, I sent the kid out to get more firewood. He’s an intelligent boy, but not terribly bright sometimes. There was wood on the deck, but he trekked all the way out into the yard to the auxillary woodpile. His reasoning: “The wood on the deck is heavier.”

On his last trip out, I glanced out the kitchen window and saw him skulking around outside the deck in the snow, his head whipping this way and that. He looked … sketchy. This was an alarm bell for me, because he’s not a sketchy kid.

I stepped out onto the deck and gazed at the only visible part of him – his sweet little face … the one that’s told me a thousand dreams, the one that called me “Mommy” and kissed teddy bears. My heart swelled with love at that face. But it was looking down, wracked with concentration.

“What are you doing?” I asked sharply.

He jumped. Shifted. Looked at me with trepidation.

In the backyard, with neighbors all around, he was peeing in the snow. OUTSIDE. IN FRONT OF THE NEIGHBORHOOD!

Consumed with laughter and anger, I ducked back into the house to tell Fiance about what was going on. He was, as he usually is, completely unaffected. “What’s the big deal, Betty? You just don’t understand boys.”

Completely outnumbered, I asked the kid what he was thinking, doing that, in his grandparents’ backyard, where anyone could see.

“I looked around. No one was watching. It was safe. I was hidden.”

He stopped and peered at me thoughtfully.

“Besides, Mom. Sometimes a boy has to pee in the snow, just to see what happens.”

Sometimes You Have to Pee In the Snow, Just to See What Happens

How many times in our lives do we just blindly do what we’re told, not trying anything new and different, because other people have convinced us of outcomes to things we’ve never even experienced?

How many times do we NOT do something new, because we’re afraid of reprimanding or failure or … even worse … the dreaded blow of judgment?

If any of those had crossed the kid’s mind, he’d have never brazenly decorated the snow, an act that clearly brought him wonderment and curiosity. While I don’t condone public urination, I’m proud of him for being courageous enough to suffer my wrath for a harmless, silly thing.

No wrath ensued, though, because of this:

After that moment, I think everyone should figuratively pee in the snow, just to see what happens.

Whether it’s putting random food on your face, writing poetry and then sharing it, buying a lip balm at the grocery store and then giving it to the woman who rang it up – try something new, just to see what happens.

Who really cares what the neighbors think, anyway?

It doesn’t matter what it is: Today, do something new.

The smallest things sometimes make the biggest impact on your outlook.

Don’t think about it. Don’t dwell on it. When an inspiration hits you, do it.

And when you’re done, come back and tell me what it was, what you felt like doing it, and what happened as a result.

Or, if you’ve recently done something silly and new, tell me about THAT. (And then go do something else.)