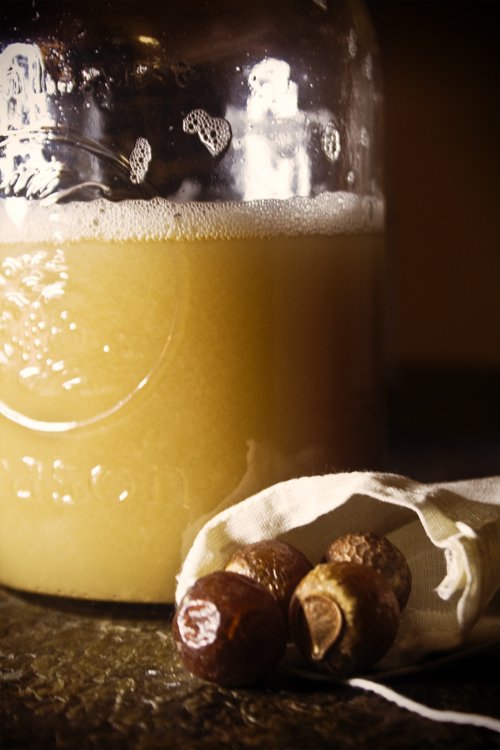 There’s more than one way to skin a soapnut.

While you can use the nuts directly in your washing machine to clean your laundry, you can also glean the magical nectar from inside the soap nut by turning it into a tea-type liquid.

With this liquid, you’ll be able to do many things.

(I think it might even do your taxes for you.)

But, today, let’s talk a little bit more about what soapnuts are and then learn how to make the base liquid that you can use for so many other things.

What On Earth Are Soap Nuts?

So a little on the deets of soapnuts.

First of all, regardless of the nutbag references, soap nuts are not nuts.

They are a fruit.

In fact, they’re a fruit that’s closely related to the lychee family. Ever had a lychee before? They’re delicious. Tasty nuggets of velvety red slurpy goodness.

How, then, they’ve been used in folk medicine to treat things like head/chest congestion and epilepsy is beyond me. And they’re being studied scientifically for their possible migraine-relief qualities.

But still, don’t eat them.

You wouldn’t want to, anyway. Once they’re boiled, they smell a little fruity, but they also smell faintly like dank soap and vinegar. Not necessarily something that gets the digestive juices rolling.

If you’d like to grow your own soap nut tree, you can. It just needs a lot of sun and water, and about 9 years to start producing fruit.

Sounds like a great investment for your kids, yeah? Plant a soap nut tree when they’re 4, and then have them start doing their own laundry with it when they’re 13. Perfect timing.

So, again, the soapnuts fruit contains components called saponins that do the actual cleansing. These act as surfactants, which basically means they scrub surfaces clean (in a very general nutshell).

I’m still just flabbergasted at the way nature provides us with everything we need – if we only take the time to look for it. (Except for that new car. And don’t EVEN tell me nature gave me feet to use as transport. That’s just silly talk.)

When you order soapnuts (from Mountain Rose Herbs, or wherever) in “whole” form (they’re also sold as powder or just shells), you’ll get the entire dried fruit. Inside the fleshy part, which is actually rock hard until you boil it, there are also beautiful little reddish-black pits.

Here’s what the boiled flesh and separated pits look like:

I’m really entranced by the pits – which have no saponins in them. Help me think of ways to reuse them. They’re hard as a rock and just about the same size as a marble.

I’m thinking I’ll either save them in a decorative jar or throw them at really loud motorcyclists that sit outside my window and rev. Any other ideas?

How to Make Soap Nuts Liquid

So, as mentioned, I’m going to do recipes tomorrow for ways you can use the soapnuts liquid, but first – we must make the liquid happen.

Here’s what you need (to start the process):

Now, as you’re boiling the liquid, keep an eye on it. Otherwise, it will start to suds a little and might boil over. This happened the first time I made liquid. I took this picture right after the overboil:

While you’re boiling the goodies, mush the nuts around with the back of your spoon to get all the saponins out.

Another note: All of the recipes I found for making the liquid just say to use 6 cups of water per 15-17 nuts. I made mine that way the first time.

BUT – the first batch of liquid I ended up with seemed pretty diluted, and the nuts were still really brown when I was done. Thus, my boil-and-add solution.

The second time I made the liquid, it was thick and cloudy, after boiling-and-adding, and the nuts had turned a light tan-gray color (as seen in the picture of the flesh and pits).

Okay. Now we have liquid. Liquid that will do many fun things.

As mentioned, this liquid doesn’t keep forever. You need to store it in the fridge, and even then it’ll only keep for a week or two.

UNLESS: You freeze it. Into ice cubes. And then … then you can just toss a couple of soapnut liquid ice cubes into your washing machine when you do the laundry.

Wonder how men would feel about THAT trick?

If you haven’t yet, don’t forget to hop over to the Crunchy Community and follow the directions on how to  win soap nuts from Mountain Rose Herbs (thanks again, guys)!

Remember – you have to enter over there. Comments (while loved dearly and greatly appreciated) on the blog posts don’t count.

Again, here’s the link to enter to win one of two 1-pound bags of soap nuts. CLICK RIGHT HERE.

You guys ready to find out all the fun things you can do with the liquid tomorrow?

(Think I should try washing my cat with it?)