You are here: Crunchy Betty » Blog » Soul Food » How to Win Happiness and Influence Yourself

How to Win Happiness and Influence Yourself

Something you want. What is it? What do you want? Choose one thing.

In the meantime, have you ever read Dale Carnegie’s How to Win Friends and Influence People? I’m guessing you haven’t, because frankly it’s a crushingly depressing admission to say that you need to read a book like that.

I am reading this book.

Not particularly by design or desire, but because my friendly neighborhood used book salesman popped it into my bag mistakenly the other day. I say mistakenly, but we all know that he’s just sitting there in a puddle of pity, hoping some day I’ll bring someone into his store with me, instead of creeping out the shoppers next to me by asking, “Hey. Hey. You have pretty shoes. What are you, a size 8?”

Anyway, I’m only about four chapters in, so I’m not really ready to win friends or influence you yet, but I have gained a fair amount of insight into what was going on in the movers-and-shakers’ minds back in the 1930s.

Believe it or not, this is relevant today, because if there’s one thing I’ve gleaned from this book, it’s the hammering home of the concept that – as a suave and sophisticated influencer – your main goal is to awaken in another person’s mind a deep, burning desire and then fill that want with what you have to offer.

And we know this, right? We savvy consumers? We know that the bulk of advertising – of product development, even – is crafted solely to evoke a desire in us that we didn’t even know we had before this heavenly, miraculous product/solution/cream came into our lives.

These things are so woven into our society now, that we don’t even know what’s true anymore. Before 2007, did you have any idea you’d ever want an iPhone? Let alone think you’d need one? 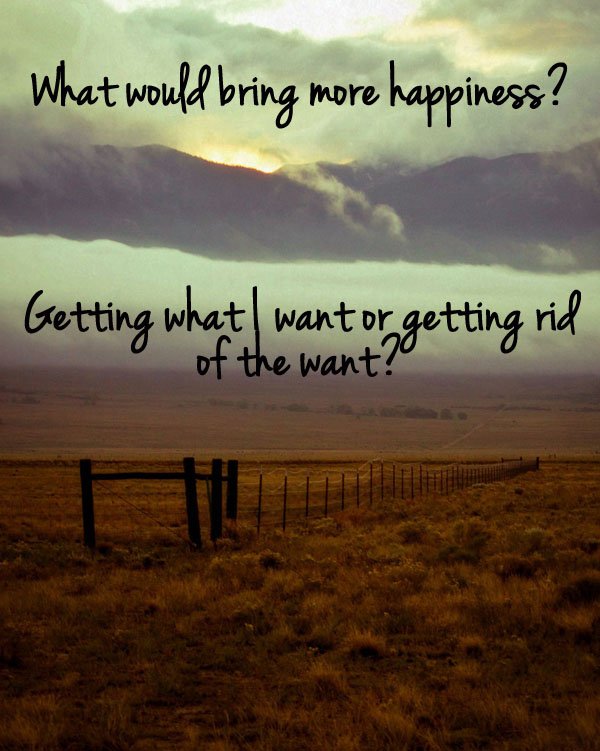 When You Get Down to It, What Do YOU Want?

The purest form of freedom is the absence of want.

If you have no desires, you have no expectations, no moments of feeling like you lack something that’s keeping you from some miraculous wholeness, you will never live in disappointment. No matter how terrible the circumstances.

But, mercy lawd, I have no idea how to live a life without want. It’s the desires and the burning that keep you moving into new experiences. So, as much as I admire the concept of living without want (though I think desire is a better word), I’ve yet to figure out a way to implement it without ending up on the couch 15 hours a day watching Will and Grace reruns.

So, in my estimation, a life without desire is a fast track to oozing bed sores.

And now that you understand I’m not suggesting you stop wanting anything at all, do you think you could give up just one want? Like, totally obliterate it? Toss it out of your life forever and for good?

Separating Your Self From the Web of Want

Remember when I asked you to write down one thing you want?

I did that too.

You know what I wanted? An automatic sprouter.

Yes, it’s silly and frivolous, and I can and have handily grown my own sprouts in a mason jar before, but I want an automatic thingy that will water my sprouts for me.

In fact, since learning about this apparatus and this want has taken over, I haven’t grown a lick of sprouts, because – beans help me – it just doesn’t seem easy enough to do it on my own anymore.

And this, dear Betties, is a fine example of how I’ve been duped by a frivolous solution to a desire I didn’t even know I had. Never in a million years, before seeing this shiny new thing, did I think I wanted something else to water my sprouts for me. But now that I know it exists, by heaven, I must have one.

No, I mustn’t. And I won’t. Because it’s expensive, unnecessary, and just the thought of it is keeping me from doing what I can with what I have where I am.

What Was Your Want? Can You Throw It Out?

You might’ve taken a different tack. You might have wanted a more loving relationship, or a flatter stomach, or a new car.

Whatever it is, can you take some time to examine it, find where it might be unnecessary for your life, and then throw it out?

The way you’re living right now might not be ideal, but you’ve done it for days, weeks, years even, and you’re still here. In fact, the possibility exists that just by wanting something different, you’re keeping yourself from experiencing the things you could be doing and enjoying right now.

But more importantly, can you examine that thing and figure out whether it’s actually something you want – deep down in your very purest of beings – or if it’s something you’ve been told you should want? Is this desire solving a problem YOU have or a problem that someone else has told you is a problem?

Let me give you a real-world example, a new one that isn’t ingrained in our beings yet, so it’s really easy to discern whether it’s a manufactured want or a real one.

(This is funny, by the way, because I’m actually going to give a slightly copycat recipe for this in the weeks to come.)

Are you bothered by the dark marks on your underarms caused by shaving? You weren’t until I said that, right? But now you are.

Well, guess what? There’s a solution for you now! It’s a popular deodorant brand manufacturer’s miracle product – a deodorant that protects you from odor and clears up those dark marks that have been plaguing you for, like, ever.

Now, think about this very carefully, are there things in your life that you want – things that you think you’re not living a full enough life without – that are actually dark-mark-removing deodorants?

Things that solve a problem you wouldn’t even know you had, if there wasn’t someone or something out there telling you there’s something wrong in your life?

Now ask yourself this: Would I be happier if I had the thing or if I got rid of the want?

Because, remember, a person without as many wants is a person who’s nearly impossible to manipulate. And that, my dear Mr. Carnegie, is what I expect to read at the end of your book.

So, Seriously. Toss Out Your Want.

I didn’t have you write it down for nothing.

If you feel like you can let this want go – if you feel like your life would be better without the want than by fulfilling it – get rid of it immediately. Crumple it up. Rip it to shreds. Burn it. It doesn’t matter.

If you feel so inclined, share that want here in the comments. Please tell us why you think letting go if it would be better for you. OR, if you don’t feel like you could/should let go of it, let us know what it is, why you desire to hold on to it, and then what you’re going to do, starting right now, to fulfill it.

Because that, my friends, is the only logical next step.

If you can’t let go of your want, you’d best go and get your want. And you can. If you really want. But if you don’t really want? Then … 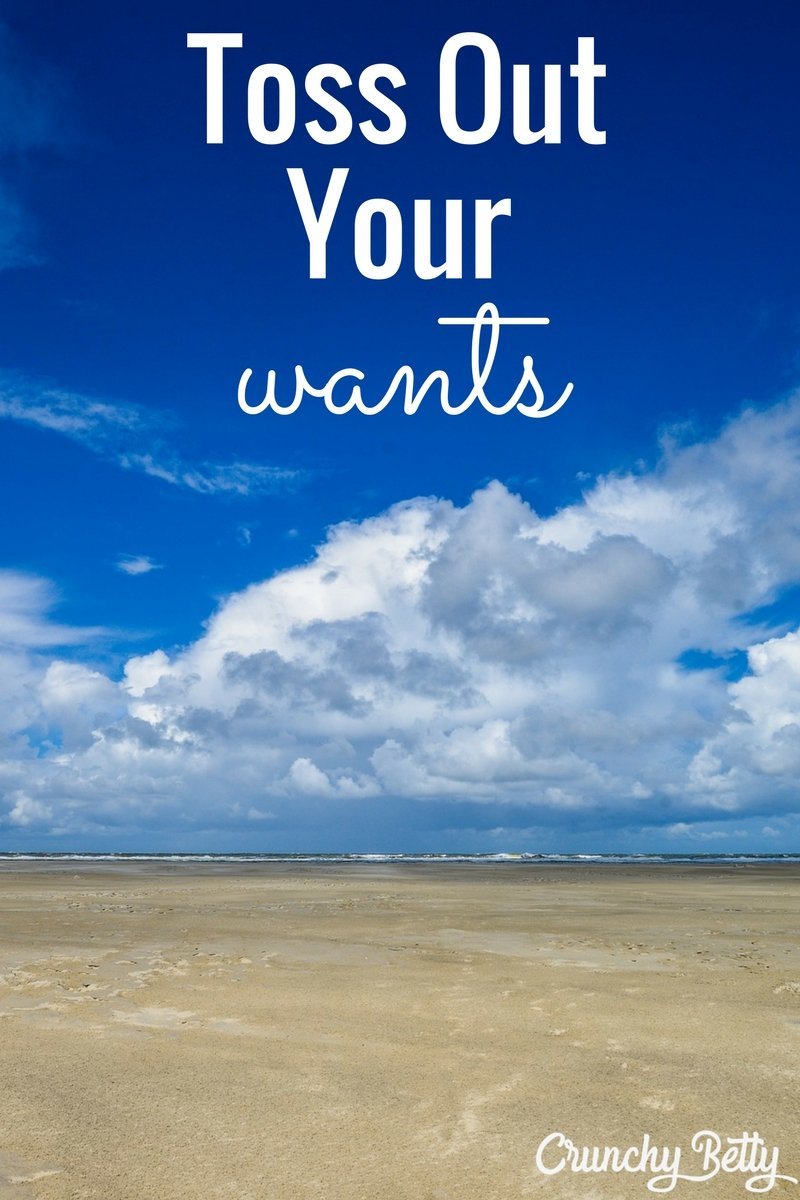 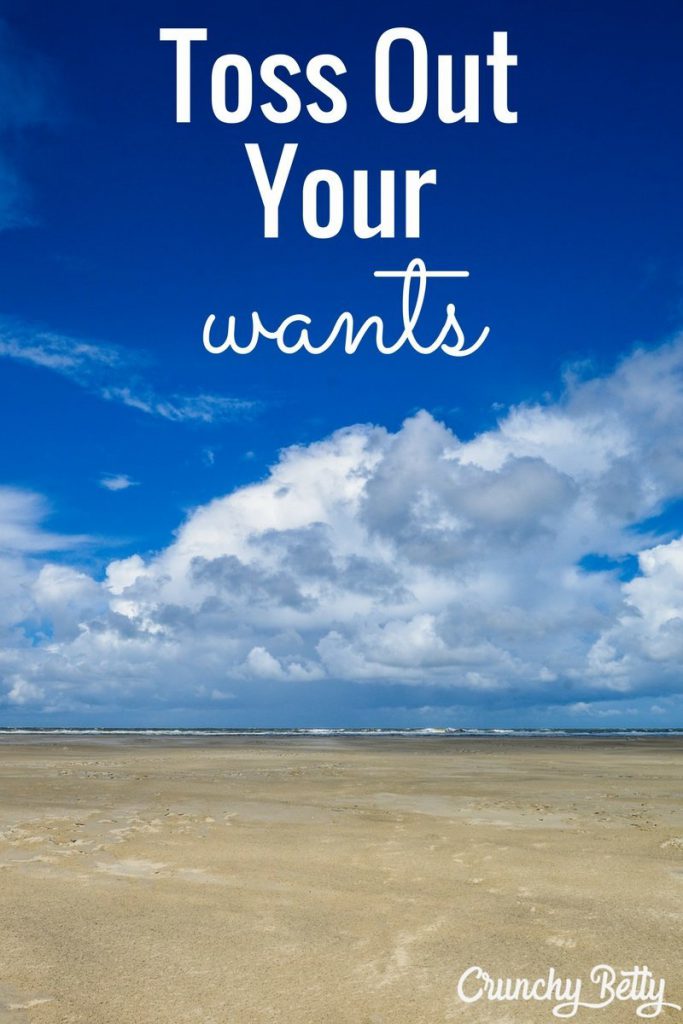 Essential Oils & Mental Clarity: How to Make Your Brain Quick & Clear
Next Post:Tuesdays Outside the Box: Jars and Small-Space Gardening!