You are here: Crunchy Betty » Blog » Crunchy Home » The Roofarm and Recipes for Not-Just-For-Gardeners Salve

Until about five days ago, if you’d have said “have some gardener’s salve,” I would have been all “Pssht, what do I need gardener’s salve for? For when I fall in the dirt after tripping on my shoelaces?” (Who am I kidding? I don’t have shoes with shoelaces. I just trip. On cracks or curbs or air. Mostly air.)

But, see, there’s really not much of a difference between “gardener’s salve” and, say, just about any other kind of salve out there. Put the word “healing” in front of it instead of “gardener’s,” and I’m all over it.

Nonetheless, because I received the initial recipe here from Diana at Lil’ Bit Farms and she called it her very favorite Gardener’s Salve, and because I actually made some because my hands were dry and cracked from working in my very own garden (otherwise known as the roofarm), we’re going to stick with the term “gardener’s salve.”

But you can think of this as an ultra-moisturizing, uber-healing salve of all sorts. So it’s great to use after you’ve been cleaning the bathrooms, working on the cars, baking a bunch of bread, or walking barefoot on the beach in Portugal with a blue umbrella’ed hurricane in one hand and the golden, glistening, muscled arm of Fausto in the other. Fausto is your summer fling.

You go, girl. Get yo’ groove back.

(Yes, it’s good for your hands and feet. Any part of your body that needs muito moisturizing. Muito means “much” in Portuguese. Ask Fausto. He’ll tell you.)

There are actually two recipes in this post: The original one from Diana, and my adapted frou-frou girly version that takes literally 10 minutes to make. Here. Whet your whistle on this photo, and then I’ll show you the roofarm right quick: 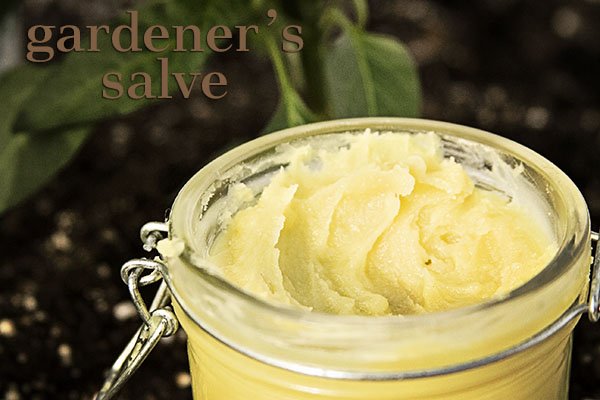 Pretty yummy looking, ain’t it? Fausto thinks so, too. He wants you to rub it on his cotovelo.

Cotovelo means “elbow” in Portuguese. I know you thought it meant something else, though, you dirty girl.

So, okay, it’s not done yet. It’s not even halfway done yet.

But this is why my hands have resembled something like two-day-old bread dough that someone (probably me) left stuck to the counter. I never thought doing this would give me outdoor worker hands, but it turns out that potting soil doesn’t fool around when it comes to weathering your skin.

This is my Garden Tower. It slices and dices, it blends and purees.

Not really, but it does grow up to 50 plants in a small space (on my roof) AND it acts as a direct-to-garden vermicomposter. You just shove your scraps in the middle tube, and the worms you add will tunnel through ’em and distribute rich composty wormpoop all through the tower.

Here’s the backside (this picture is from only a day after planting, and the lettuce, I’m happy to report, has perked up considerably): 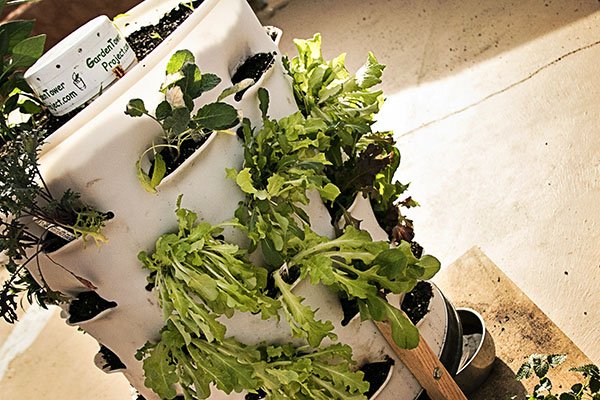 I’ve only been able to work with it for four days now, and it doesn’t have worms yet, but so far so good. I’m going to hold off recommending the investment until I see how things do throughout the summer (and especially after the worms come home to stay). But if you’re interested in urban gardening, you might want to start doing some research into it for next year.

(The Garden Tower people have no idea who I am, so just FYI this isn’t an advertisement or anything. Just a PSA for anyone interested.)

So, if you have a garden and find yourself with gardener’s skin, if you walk around barefoot during the summer, or if you have issues with constantly dry cotovelos, here’s the recipe to remember.

This is Diana’s version, exactly as she gave it to me (I haven’t changed a single ingredient, scout’s honor):

Diana: Here’s one of my favorite recipes. It’s a quick and easy beeswax salve. I originally used this as an udder balm for my goats, but I’ve had several people tell me how well it has worked for their skin. I love it on my driest parts, like feet and elbows. In fact, slather this goodness on your feet, throw on some toasty socks and go to bed. You’ll wake up with nearly sandal-ready tootsies! I make this with olive oil infused with calendula and no scent. It absorbs really quickly and the beeswax makes the moisturizing effects last!

Melt carefully in pint jar, either in double boiler or microwave on 30 sec bursts.

Stir with a fork as it cools.

(Betty’s note: I LOVE that you can melt this directly in the jar in the double boiler. Just make sure you’re super careful not to accidentally get any water in it (this could lead to mold or bacterial growth.)

One thing I forgot to mention?

For my version, I skipped any thought of infusing oils with herbs, because I didn’t have any time to wait. Instead, I made Diana’s version and then added some essential oils. For whatever reason, I was seriously craving the combination of lavender and vanilla.

So that’s what this recipe reflects. Lavender and vanilla. However, you can use any essential oil combination you’d like – I’d just suggest skipping any citrus essential oils. They’ll make your skin a bit photosensitive (if you’re just going right back out in the sun) and they tend to be more drying than moisturizing, anyway.

For my version, I also halved the recipe (which filled the container you see in the first and last photos in this post, which is a LOT of salve in itself).

Here’s what you need: 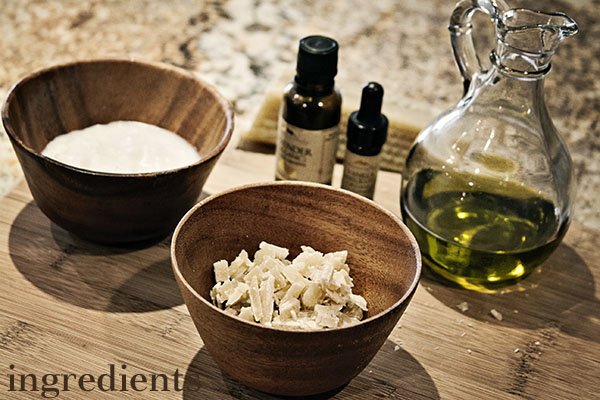 Extra-virgin olive oil (though you could use any type of oil you’d like – EVOO is a bit fragrant itself, so if you don’t like the smell of olive oil, use sweet almond or apricot kernel or something that doesn’t have much of a scent).
Cold-pressed coconut oil.
Beeswax.
Lavender and vanilla essential oils (or your choice of essential oils). 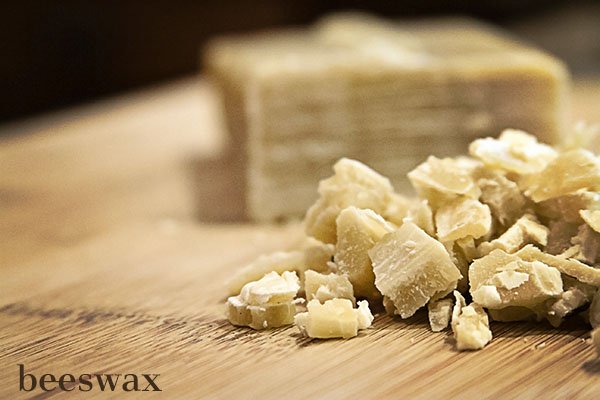 This is just a bonus photo of beeswax, because I think it’s pretty. 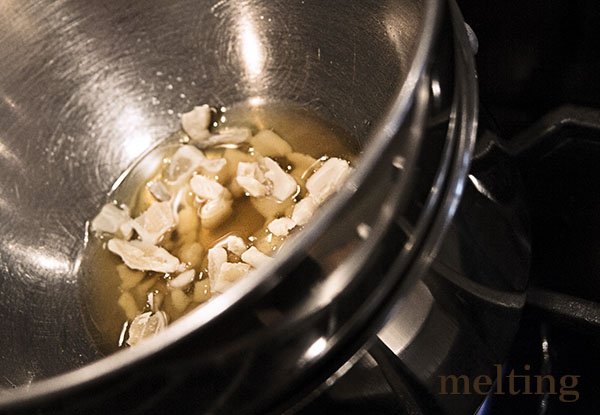 I always like to melt my beeswax first, before adding the other oils, just so I’m sure I don’t “overheat” the remaining oils. I think this is just a habit I got into after working with shea butter so much (which tends to get grainy if you overheat it). You don’t have to do it this way. Unless you want to be like me. 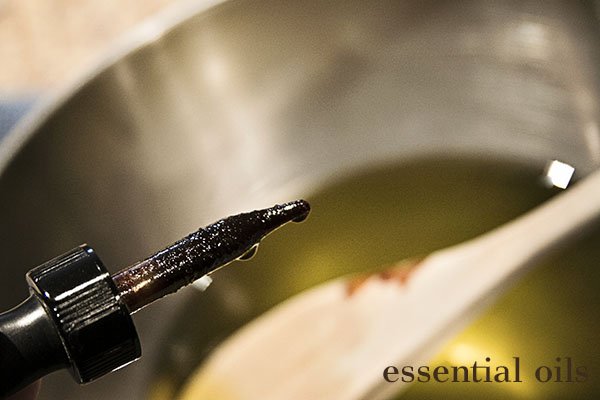 Once your oils and beeswax are melted, drop in your essential oils (I used about 30 drops lavender essential oil and 20 drops vanilla essential oil, which yielded a nice light scent).

(It’s also pretty pricey. I get mine from Mountain Rose Herbs, but you can find a blended version, with jojoba, from Aura Cacia if you’re looking in the grocery store.) 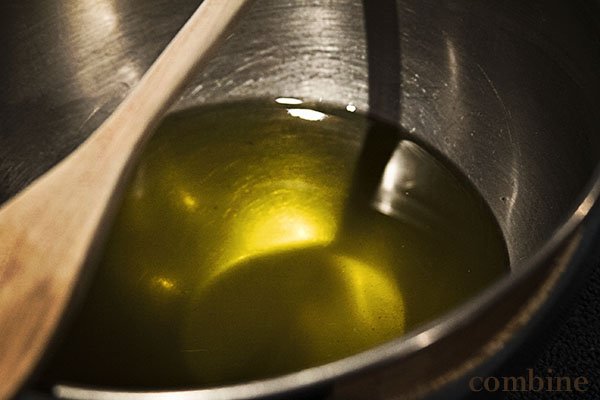 Combine everything very well with a spoon.

Pick a spoon, any spoon. 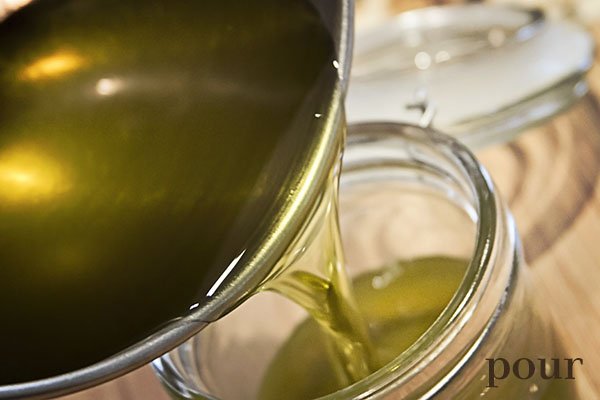 Pour it into your chosen container carefully.

If you think I’m kidding about carefully, I’m not. 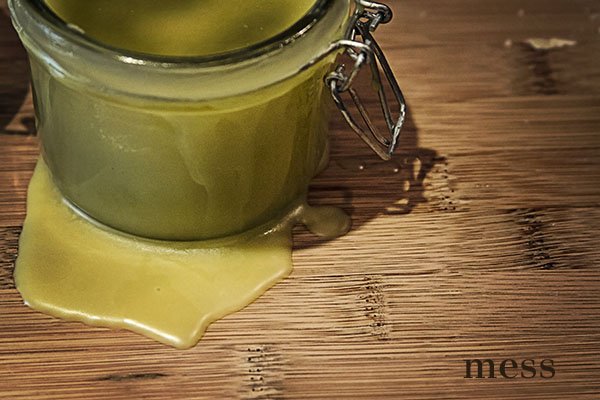 If you’ve never worked with beeswax before, please note that it can be pretty tiresome to clean up. It DOES clean up, and clean up completely.

I’m just sayin’. Watch what you’re doing so you don’t make a mess.

Unless you don’t want to watch what you’re doing. Because you want to be like me. 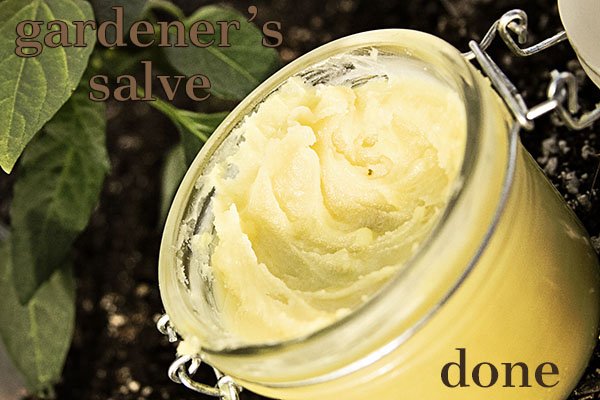 After you get it into your container, you just do … nothing. Nothing at all for 2-3 hours while it hardens.

If you want it to harden faster? Just slip it into the fridge for 20 minutes.

In a makeshift double boiler, melt the beeswax and oils. Remove from heat. Drop in the essential oils and mix well. Pour into your chosen glass container and allow to harden before using. This should last up to 12 months (or longer, if kept in a cool, dark place).

When I made this a couple of days ago, I kept thinking about how absolutely, grade-A perfect this would be as a Father’s Day gift. Men are notorious for dry hands, because they work so hard with them – gardening, fixing cars, doing yardwork, eating steak, and holding video game controllers.

My father, in particular, loves his (watery) lotion a lot – and boy does he need it. I’m hoping to show him the benefits (and MUCH more marked effectiveness) of handmade healing salve instead. I started a version of oils infusing with herbs (comfrey and calendula, to be exact) a few days ago, and I’ve worked out a manly scent that I know he’ll absolutely love.

Because we’re not done talking about salves.

In a few days, I’ll give you the recipe (and I think I’m going to have a little bit extra, which I may put up in the Etsy Natural Market store).

In the meantime, I’m curious …

What do YOU think the best “man scent” for a salve would be?

(You might want to give this some thought. Fausto would really appreciate this as a gift, too.)

(Oh! P.S. Thank you for the recipe and inspiration, Diana from Lil’ Bit Farms! We’re not done talking about you yet – in the next post, we’ll get up close and personal with your eggs.) 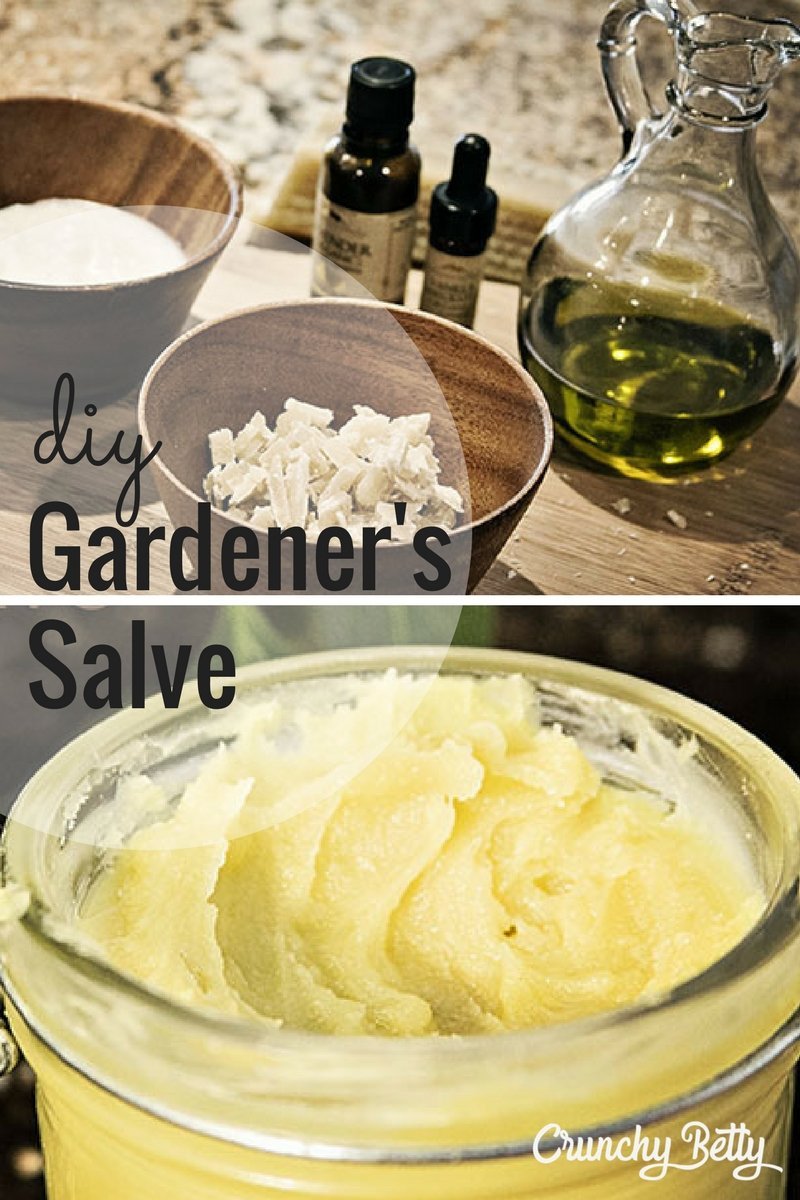 Stop Procrastinating and Easily Remove Candle Wax From Your Carpet
Next Post:12 Things You Should Know About (and Do With) Your Eggs